Java continues to be a challenge on the OSX platform. We have recently experienced just how sensitive Scalismo is to using the correct Java version.

As explained in the setup guide, we encourage people to install the Zulu version 11.0-9 of JVM using the command line.

However, when using Zulu JDK in IntelliJ, there is no option to select the specific minor version 9. Unfortunately, the newest version does not always work and might result in the following error when initializing Scalismo:

To fix this, we have to manually import the Zulu 11.0-9 JDK downloaded with Coursier from the command line. To do so, we need to know the java.home directory. This can be found by starting sbt and invoking:

This will produce an output similar to: 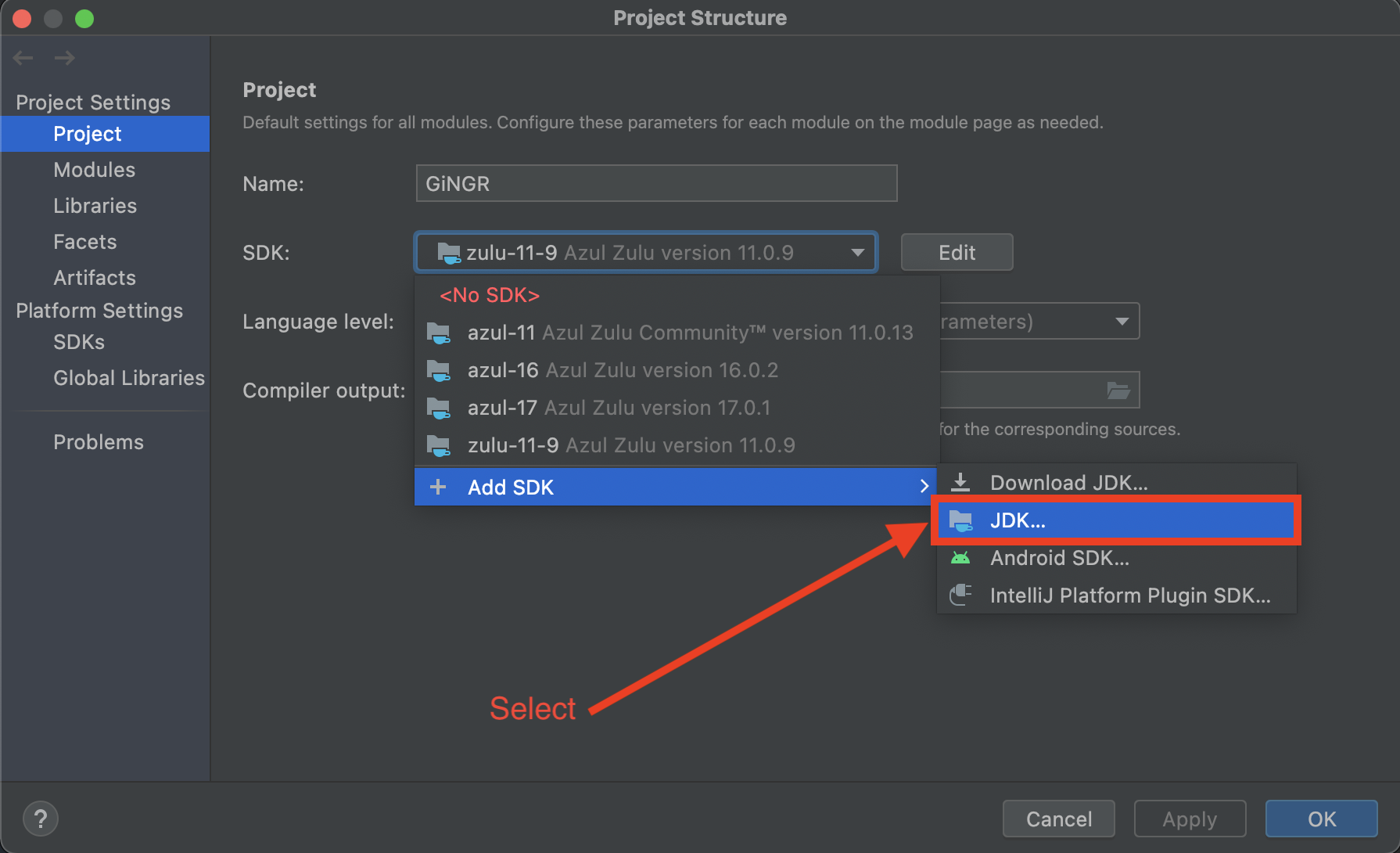 We now have to navigate to the folder. Note that the Library folder is hidden, and so to see hidden folders, click: CMD+shift+.

Apply changes and make sure that the SDK is set to the correct Zulu JDK.

The recently released version of Scalismo - version 0.90 - comes with a number of important changes in its core classes. In this blog post, we will look at images.

In older versions of Scalismo images had a special status in the library. While conceptually they were thought to be just discrete fields, they were implemented using a number of special classes, representing the differnet types of images. This led to inconsistencies in the API and complicated the type hierarchy. Even worse, it enforced the wrong notion that image are conceptually different from other representations of intensities used in Scalismo. In version 0.90 we cleaned up the hierarchy and removed all the special classes. Discrete images are now simply a special instantiation of a discrete field, whose domain is a regular grid. In the following we explain the underlying concepts, show how we can create images and how we can obtain a continuous from a discrete representations and vice versa.

Similar to other types of representations, images come in two types: Discrete images and continuous images. Continuous images are modeled as a Field; I.e. they are functions that have a domain D⊂Rd and map each point of the domain to some values. The mapped values can be scalars, vectors or even more complicated objects.

Discrete images in turn are a special case of a discrete field. Discrete fields are defined as a finite set of points, where for each point we have an associated value. A discrete image is a discrete field, whose domain is constrained to be a regular grid; I.e. whose domain points are equally spaced. That the points are equally spaces makes it possible to represent the domain points implicitly by a mathematical formula rather than having to explicitly store them. Furthermore, accessing the image values and looking up closest points becomes a constant time operation.

The basic object to represent such a set of structured points is the class StructuredPoints. We can create a set of points on a grid as follows:

This creates a grid of points 32×64×92 points, where the bottom left point is at the origin, and the points are the in the x,y,z direction 0.1mm apart.

Note that the grid of points is aligned to the coordinate axis. In case you would like to have a different alignment, it is possible to specify a rotation of the points. The rotation is specified by 1 or 3 Euler angles, depending on whether there is a 2 or 3 dimensional image.

The image domain represents a domain, whose points are aligned in a rectangular grid. Naturally, it uses StructuredPoints as a representation of the underlying points of the domain. We can create an image domain from structured points as follows:

For convenience, Scalismo also offers the possibility to specify the origin, spacing and size directly, as we did for the structured points.

Note however, that this still creates a structured points object internally.

As for structured points, we can also define a rotation, by specifying the corresponding Euler angles.

Finally, we can specify the points by specifying its bounding box together with the information about the spacing or size:

This last creation method is particularly useful for changing the resolution of an image, as we will see later.

Alternatively, we could have specified the values using an array, as follows:

Note that an image is just another name for a discrete field with a image domain. We could have equally well constructed the image as:

It is often more convenient to work with a continuous representation of the image. To obtain a continuous image, we use the interpolate method and specify a suitable interpolator:

The resulting object is defined on all the points within the bounding box of the image domain. To go back to a discrete representation, we can specify a new image domain and use the discretize method. As the new domain could be bigger than the domain of the continuous image, we need to specify a value that is assigned to the points, which fall outside this domain.

Of course, we could also resample the continuous image using a different type of domain. Assume for example that we have a CT image of the upper leg, but we are only interested in representing the intensities for the femur bone. We could then discretize the (interpolated) image using a tetrahederal mesh, and thus obtain a representation of the field which is restricted to the femur bone only.

We have discussed the new design of images in Scalismo. Discrete images are modelled as discrete fields, and thus have a domain and associated values attached to it. The points of the domain are represented using the class StructuredPoints, which represent points that lie on a regular grid. Exploiting this special structure, we can efficiently access values associated to the grid points in the image, or use dedicated interpolation methods to swich from a discrete to a continuous representation. Once we have the continuous representation, we can discretize using a different domain, which allows us for example to resample the image in a different resolution, restrict the image to a part of the domain or even change the type of the domain.

The recently released version of Scalismo - version 0.90 - comes with a number of important changes in its core classes. In this blog post we will look at the class PointDistributionModel, which replaces and generalizes StatisticalMeshModel.

We start by discussing the differences to the previous implementation. We then show how to create Point Distribution Models. In the last part we will discuss how we can change the domain over which the Point Distribution Model is defined. This allows us to change the resolution of the model, restrict the model to a subset of the original domain, or even to change the type of domain over which the model is defined.

Recall that shape variations are modelled using Gaussian processes in Scalismo. More precisely, we use a low-rank approximation of a Gaussian process, which models a probability distribution over deformation fields,

The type signature indicates that the Gaussian process is defined in 3D space and it represents a collection of random variables over 3D vectors in Euclidean space.

A StatisticalMeshModel is the restriction of this continuously defined Gaussian Process to a discrete and finite set of points. This set of points is defined to be the vertices of a triangle mesh, which is called the reference mesh. Thus, a StatisticalMeshModel is just an aggregate of a mesh and a corresponding Gaussian process, restricted to the points of the reference mesh. This is reflected in the definition in Scalismo:

From this description it becomes obvious how we can generalize this to other types of datasets. As we only use the points of the mesh, we can relax the restriction that the reference has to be a triangle mesh. Instead, we assume that the dataset is defined on a finite set of points. In Scalismo, a dataset which is defined on a finite set of points is modelled as a subtype of the class DiscreteDomain. This is the basis of the definition of a PointDistributionModel:

Here we replaced TriangleMesh by the generic type DDomain, which can be any subtype of a DiscreteDomain. The implicit argument warper restricts the domains further to domains that can be deformed. In Scalismo these are currently the classes TriangleMesh, TetrahedralMesh, LineMesh and UnstructuredPointsDomain.1

Now that we know what a Point Distribution Model is, we will show how we work with them in Scalismo. Our first example illustrates how to learn a Point Distribution Model of tetrahedral meshes from given example meshes. This is simple: We create a data collection, where we provide a sequence of tetrahedral meshes and use the method createUsingPCA to create the model:

As expected, samples from this model are valid tetrahedral meshes.

Creating models of other types of data sets works exactly in the same way. We simply change the corresponding type of the reference and the data collection.

A second way to create a PDMs is to specify a low rank Gaussian process as well as a reference mesh on which the Gp will be discretized:

Again, samples from the model will have the correct type:

In the following example we show how we can use this method to obtain a PDM of a triangle mesh from a model defined over tetrahedral meshes. As the new reference we use the outer surface of the tetrahedral mesh over which the original PDM is defined

Another common use case for this method is to restrict the model to a subset of the vertices on which the PDM is defined. This can either be used for restricting the model to a part of the domain, or to change the resolution of the domain. This latter use case is illustrated in the following code:

Having an easily accessible method to change the points on which the PDM is defined, makes it possible to choose the appropriate mesh resolution for each task. We might for example want to start with a high resolution model, which result in visually pleasing samples when rendered, but reduce the mesh resolution when fitting the model, in order to save computation time.

We have seen that the new PDM class generalizes the concept of StatisticalMeshModel from previous versions of Scalismo. The newly introduced class PointDistributionModel can be defined over any subtype of DiscreteDomain, which supports a warping operation. Besides triangle and tetrahedral meshes, this includes line meshes and unstructured point domains. Another notable feature of Point Distribution Model is that it provides a method to change the domain over which the PDM is defined. This makes it possible to restrict a Gaussian process model to a part of the domain, change the type of the domain or to change its resolution.

1: An example for a discrete domain, which cannot be used as a basis for a PDM is a

DiscreteImage. The reason is that an image is defined on a regular grid, but once we warp the grid it is not regular anymore and hence not an image.

Scalismo has a new website. It is powered by Docosaurus.